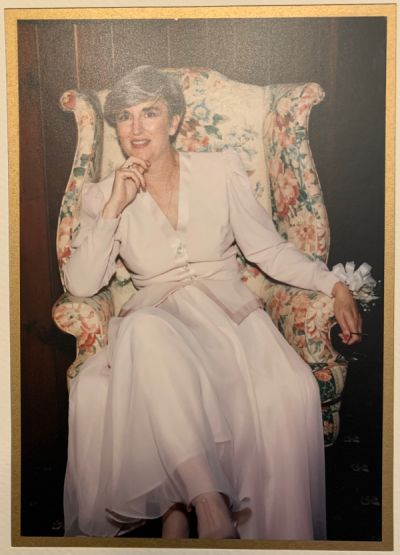 Today I am missing a ROCK from my life … my sister. I had her for 77 years and it is hard to let go. She was the epitome of a strong woman. I always think of her in that way even as a child. It seemed like she was leading the way and I was always a step or two behind her. We were born almost exactly two years apart. Her birthday was July 6 and mine is July 20.

When we were very young we cleaned the kitchen after dinner. She was usually the washer and wanted me to be the drier. That way she finished before I did!! We slept in the attic at that home and she always read to me before we went to sleep. I think we shared one bed and our brother slept in another bed in the attic with us. I can remember walking to school with her in elementary, junior high, and some in high school. She had a friend in high school with a car so sometimes she rode…

We both took piano lessons from a Sister at St. Scholastica. Gerry was a diligent student and learned to play both the piano AND the organ. I barely learned the piano…. We later both played flute in the school band. She went on to learn to play the piccolo and our dad bought her one. I later learned and used her piccolo after she graduated high school.

She entered TCU as a nursing student but after 2 years and working on the floor in the hospital, she decided she was as smart as the residents she was working with so she changed schools and majors and went into pre-med. My dad convinced her to attend Arkansas Tech where I was starting as a freshman so we became roommates. We heard a lot of people say that would not work for sisters to be roommates… but we did great! The main downside was when she came home from anatomy lab smelling like formaldehyde. She was one of about 10 people on Tech campus with a car so we and friends got to attend all the Tech away football games. Those were fun times.

She was accepted into Tulane Medical School after 3 years of college, where our brother was already attending. There were about 5 girls in a class of 125. Those girls HAD to be strong to survive the jokes played on them by the male med students. At her med school graduation she was chosen to be the “planter of the ivy” — a long standing tradition at Tulane and a position of honor. The family was all there to support her achievement and show our pride.

One place where I got ahead of her was marriage. Steve and I were married two years before she and John. They were married 53 years. She met John in med school and he joined the Air Force to complete a residency in dermatology so they moved to Texas, Maryland, and Ohio. They settled in Tacoma, WA where John started his practice in the area called Lakewood and they bought a home on Lake Steilacoom. They became an intricate part of the community and raised two children, Henry and Pam… along with a neighbor boy, George, who became like a son. Gerry put her career on hold while the children were young, but later worked as an admitting doctor in a civilian capacity for the Army at Ft. Lewis. That gave her an 8-5 job so she could be a mom and still be available for her children.

When our daughter, who was a year older than Henry, was ready to go to college she wanted to “go away” to school. We were living in Little Rock at that time so my sister said, “Let her come live with us and go to our community college for a year and that will be away!” Now how many people make an offer to have another teenager come live with them!!! But, my strong sister did and it worked. Of course there were ups and downs but still, the end result was Stephanie graduating from Western Washington University in Bellingham, WA with my sister and family there to celebrate with us.

The distance from Washington to Arkansas is long, but Gerry and family came back “home” often for Thanksgivings and for family reunions and many of us visited out there as often as possible to maintain family ties.

Gerry and John attended “The Little Church on the Prairie”, a small Presbyterian Church near their home,  and she became a part of a woman’s sewing group. They made quilts and other handmade items to sell at an annual bazaar to help raise funds for the church. Gerry was an excellent seamstress and designed and made beautiful quilts for lots of people. When I would go to visit her we would usually end up making a quilt of some sort. There is no telling how many baby quilts she made and gave away over her lifetime and they were usually a unique design just for a specific person. Plus she designed and made full sized quilts for all her grandchildren when they graduated from high school.

When Stephanie found the love of her life and decided to get married she had traveled the world and had brought back some silk saris from India. She wanted her bridesmaids to have dresses made from the saris. We turned to Aunt Gerry and asked for help. Her response was of course she could and would make those dresses. Little known to Gerry was the fact that the girls were literally all over the world and she ended up calling one who was living in Bulgaria at the time to get her measurements to ensure a correct fit. The others were in Arkansas, California, and Texas. Gerry ended up making mock-up dresses from muslin and sending to each girl to try on before she cut the beautiful silk and started sewing. Quite a process but completed with love and perfection. AND, she also made a beautiful queen size quilt for Stephanie and Paul’s wedding gift!

As the aging process set in for all of us and poor health became an issue for Gerry, our brother, Bob, and his son Tuie, Steve and I started making fall and spring visits to Tacoma to see Gerry and John. We made several trips out there the last being April of 2018. Later in that year John and Gerry’s son and daughter-in-law asked them to move to La Grange Highlands, Illinois to live with them. After much discussion John and Gerry agreed and as they say, the rest is history. We made a visit in October of 2018 to Illinois and then made our last visit to see Gerry last week.

We were blessed to get to spend 3 days lying on the bed with her chatting about family, sitting on the sofa with her just holding her hand and listening to Tuie tell how we are all blessed to be children of God and have so much love in our family, and got to sit on the front porch of their new home in wonderful cool weather and just spend time together. It seems to me that Gerry just held it all together until we could all meet one last time on this earth. I am so grateful to have had this strong woman always in my life as my mentor, inspiration, supporter, and friend. She will be dearly missed. I pray for our family to remain together and strong in love as a tribute to her faithfulness.